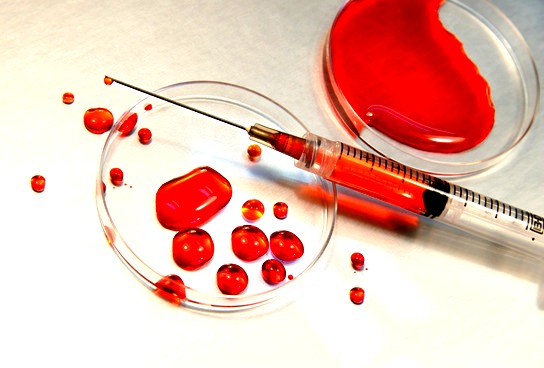 New research shows how vaccines cause immune system blood cells to divide into non-identical daughter cells. The researchers suspect that this may explain how blood cells can become cancerous, causing leukemia.

Researchers at the University of Pennsylvania’s Perelman School of Medicine have found how B lymphocytes produce non-identical daughter cells as part of the process of producing antibodies. Their paper on the study, “Asymmetric B Cell Division in the Germinal Center Reaction“, notes that:

That is, the production of antibodies via vaccination changes the nature of lymph and the manner in which cells communicate. This is a significant, and serious, permanent change in the way the immune system functions. The authors themselves conclude this many explain how blood cells can turn become cancerous.

Unfortunately, the researchers don’t see, or don’t admit to seeing, the true implication:

Vaccines may be causing leukemia.

Instead, they see their discovery as an opportunity to find better vaccines! That’s rapidly becoming a primary source of income for Big Pharma, so it’s becoming a common statement in basic research. If a researcher hopes to continue receiving funds for studies, then it’s necessary to indicate that what they’ve found could be helpful in the mad dash after anything that might lead to more vaccines.

Macrophage is a term that comes from the Greek for “big eater”. Macrophage cells search and eat invaders, such as bacteria. Proteins from the eaten bacteria are broken down into their component peptides. These peptides are then attached to the surface of the macrophage.

When a T lymphocyte (commonly referred to as T-cells, which are so critical to AIDS patients) senses the same peptide on a B-cell that’s on a macrophage, it stimulates the B-cell to start producing antibodies.

The antibodies bind to the invaders, which makes it easier for white cells to ingest them. In some cases, the antibodies combine with an element of blood plasma, making them capable of killing the invaders outright.

The Difference Between Natural and Vaccine-Induced Immunity

We’re routinely told that our immune systems cannot tell the difference between natural and weakened invaders, or copies of bits of them that are commonly used in vaccines today. This, though, is far from from reality. The truth is that antigens are not readily formed from these weakened and partial pathogens, which clearly indicates that macrophages do see the difference between genuine invaders and injected pseudo-invaders.

Finally, we need to ask what these pseudo-pathogens, combined with adjuvants, are doing to the macrophages. Are they producing mutated cells? We do not know.

The study investigated how antibodies are made after vaccination. It has long been known to happen in a manner different from natural immunity.

Production of Daughter Cells by B-cells

As noted above, B-cells produced by macrophages in turn produce antibodies when stimulated by T-cells. The new research investigated this process. When stimulated, B-cells divide. However, unlike typical cell division, in which two identical daughter cells are produced, B-cells split into two different kinds of cells.

One of the daughter cells contains three types of proteins that determine what kinds of antibodies to produce, and these B-cells divide into replicas of themselves. The other type of daughter cell apparently improves the quality of the antibodies produced. 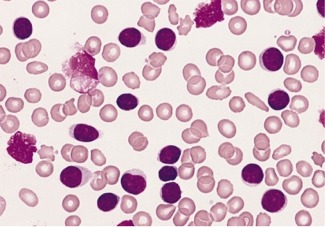 Blood smear of lymphocytosis in B-Cell leukemia. The light colored cells are lymphocytes. You can readily see three severely damaged cancerous cells. (Photo is public domain, from the Armed Forces Institute of Pathology in the US, PEIR Digital Laboratory.)

This brings into question the nature of the cells that result from vaccine-induced peptides on macrophages. Do they truly match those of genuine invaders? Could they result in the production of defective B-cells, even ones that are cancerous? B-cells are a type of white blood cell, and there is a type of leukemia, as noted in the graphic to the left, called B-cell lymphoma.

If any possible association between an increase in vaccinations and an increase in leukemia can be shown, then caution should certainly indicate that the potential of vaccine-induced leukemia should be investigated. As it turns out, such an association can be readily demonstrated. 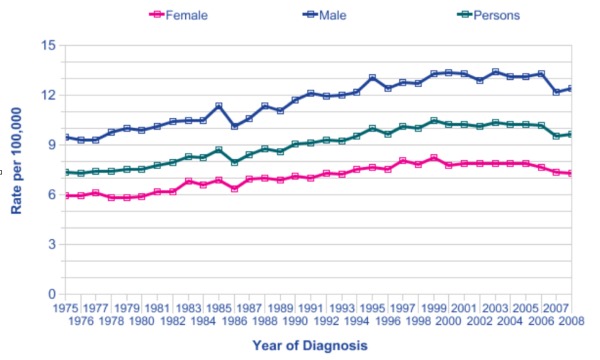 This graph from Cancer Research UK provides a clear association between increased vaccination rates in Great Britain and increased leukemia rates. Though the incidence of diagnosed leukemia has decreased recently, it can’t, at this point, be indicative of a trend. As can be seen on the graph, such temporary decreases have occurred before without affecting the general trend.

It should be noted that acute lymphocytic leukemia (ALL), a B-cell type, is most commonly diagnosed in children. 63.6% of all such cases are diagnosed in people under age 20 years. Since B-cells are significant in vaccine-produced immunity, could the increase in ALL be a significant part of the increase in leukemia? As it turns out, the answer is yes. From 1982-2001, the incidence rate of B-precursor ALL in nordic countries increased from 2.92 to 3.59 per 100,000—an increase of 23 percent in children.

A correlation between an increase in B-cell related leukemia in children and the increased rate of vaccinations does exist. So, we have both a correlation in a leukemia that’s related to B-cells and leukemia in general. Plus, this study demonstrates that the mechanism of vaccine-derived antibodies utilizes B-cells.

It is, therefore, reasonable to suggest that there may be a causal link between vaccinations and leukemia. Certainly, the evidence such a potential indicates that, rather than investigating yet more types of vaccines, medical science should be devoting itself to investigating the risk of vaccine-induced leukemia.

Not only is leukemia now an implied risk of vaccinations, as discussed in other Gaia Health articles, a downward trend in children’s health may also be a result of vaccine damage. This study shows the potential of deranged immune systems resulting from vaccinations. We can also see that disease immunity produced by vaccines, if any exists at all, is likely defective.

We are seeing massive increases in chronic diseases, especially in children—Autism. Cancer. Allergies. Asthma. Diabetes. Neurological Disorders. It begs credulity to suggest that there’s been a major shift in genetics causing it. Clearly, it’s time to face this reality and stop sending good money after bad. Research needs to focus on causes for which we have evidence of a connection. There can be little question that the rise of these chronic disorders in children—not to mention many in adults, such as Alzheimer’s disease—exist in a trajectory similar to the rise in vaccinations.

With the health and well-being of virtually all humanity now apparently at risk, it’s long past time to face this issue. We must demand honest research in causes of all this ill health, with a focus on a likely connection with vaccinations.

With great appreciation to Jagannath Chatterjee
for bringing this research to my attention.